Mahmoud Darwish: Psalm 9 (“O rose beyond the reach of time and of the senses”) / Stop Paying for Ethnic Cleansing and Send Your Kids To College For Free: A Modest Billboard Proposal 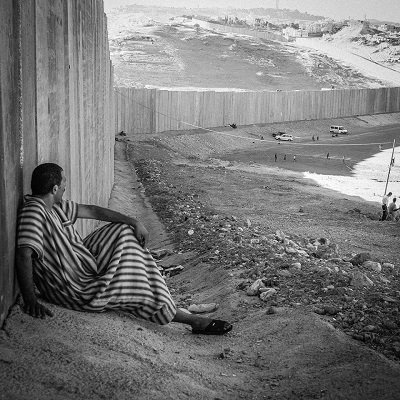 Mahmoud Darwish: Psalm 9
O rose beyond the reach of time and of the senses
O kiss enveloped in the scarves of all the winds
surprise me with one dream
then my madness will recoil from you
Recoiling from you
in order to approach you
I discovered time
Approaching you
in order to recoil from you
I discovered my senses
Between approach and recoil
there is a stone the size of a dream
It does not approach
It does not recoil
You are my country
A stone is not what I am
therefore I do not like to face the sky
nor do I lie level with the ground
but am a stranger, always a stranger 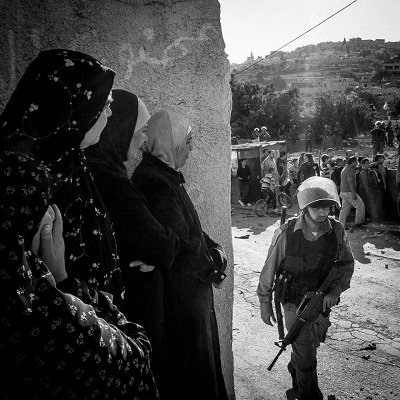 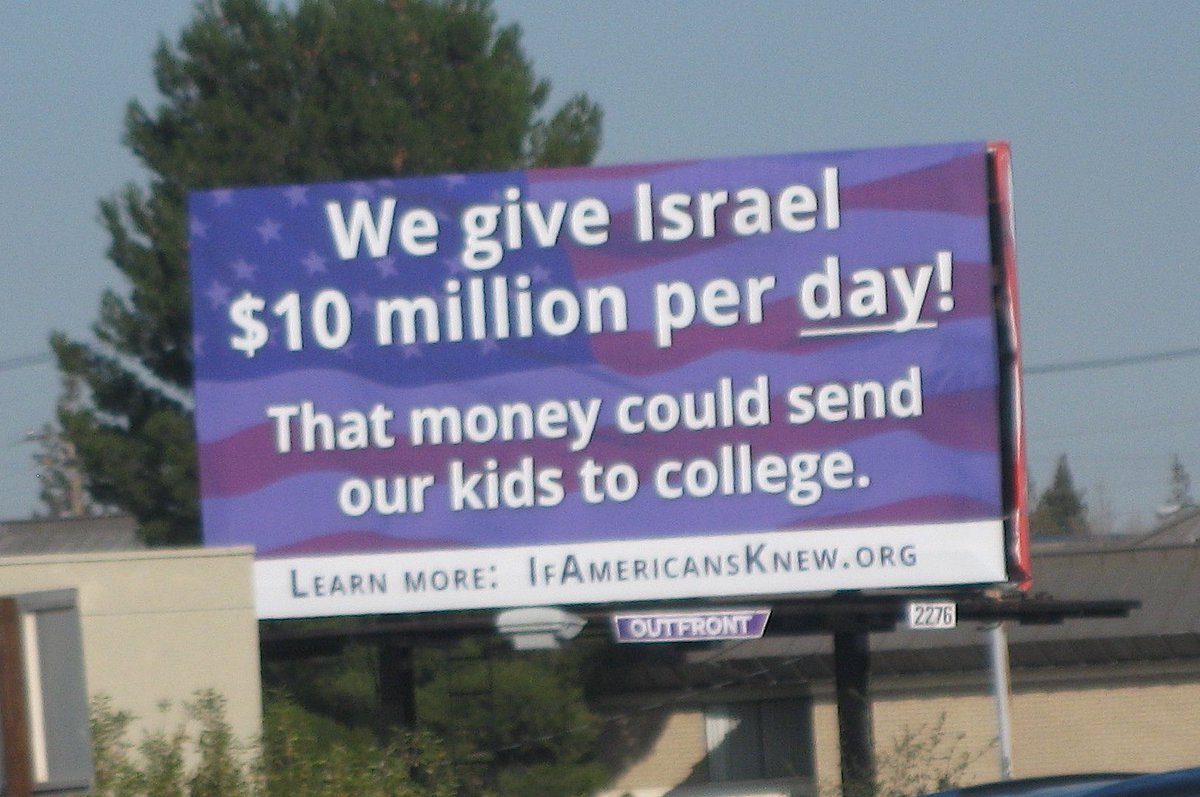 Billboard along heavily traveled I-680 in Walnut Creek, California, seen on 18 February 2016. If Americans Knew, a California-based group, paid $5,000 for a 30-day rental of the billboard. Journalist and author Alison Weir, of Richmond, California, speaking on behalf of the group in Walnut Creek on 9 February, said billboards like Walnut Creek’s have appeared in almost 30 states, and that new ones are coming to Connecticut, New York, Texas and Florida. American taxpayers give Israel $3.1 billion per year in direct military aid, and routinely provide millions more each year for missile defense programs. (For fiscal year 2015, Congress gave Israel an additional $619.8 million, making total military aid to Israel $3.7 billion, or $10.2 million per day.) Palestinians do not receive military aid. Late Sunday, after the “$10 million a day” billboard comes down, another will go up at the same spot in Walnut Creek, sponsored by Los Angeles-based pro-Israeli group StandWithUs. Its graphic design will be similar, but its message will quite different. StandWithUs has used this direct-replacement strategy in other cities.: photo by Jose Carlos Fajardo/Bay Area News Group via Contra Costa Times, 22 February 2016

He repeats talking points developed by Israel’s billion-dollar advocacy machine, including the usual accusation that critics are supposedly “bigoted.”
Let us examine the facts:
Thanks to the powerful Israel lobby, politicians from both parties have sent tiny Israel more of our tax money than they’ve sent to any other country — on average 7,000 times more per capita than to others around the world. Today this is $3.7 billion per year (more than $10 million per day).

In a unique arrangement, Israel gets almost all this money in a lump sum at the beginning of the year. Since the U.S. is operating at a deficit, this means that we borrow this money, give it to Israel and then pay interest long after it’s gone. Israel deposits this in an interest-bearing account, making even more money off the U.S. economy. And this is just the tip of the iceberg.

Added to this disbursement is $1.45 billion annually to Egypt and $1.5 billion to Jordan, thanks to deals concocted by Israel in which American tax money would be used to buy off opposition to Israel’s ethnic cleansing of the non-Jews who originally inhabited the land it wished for a Jewish-only state.
On top of this is the more than $2 trillion cost of the Iraq war, which was engineered by Israel partisans in the administration and enabled by others in the national media, such as Judith Miller, formerly of The New York Times. Impossible to quantify in dollars are the thousands of American and Iraqi lives destroyed through this disastrous invasion.
In addition to these costs is the humanitarian aid for Palestinians who have been displaced, whose property has been stolen, and whose deaths and injuries are caused by Israeli invasions. Additional aid is given to the Palestinian authority to round up resistance fighters on behalf of Israel. This totals about $700 million per year.
In addition to the deep financial burden these disbursements impose on Americans, our money enables Israeli violence and aggression that causes continuing instability and tragedy throughout the Middle East. This prevents peace, endangers Americans, and is a continual cause of misery.
It also gives Israeli militarists the belief that since Israel has the most powerful nation in today’s world in its back pocket, there is no need to compromise with Palestinians. Only when Americans change this dynamic will true peace negotiations be conducted and peace eventually forged. 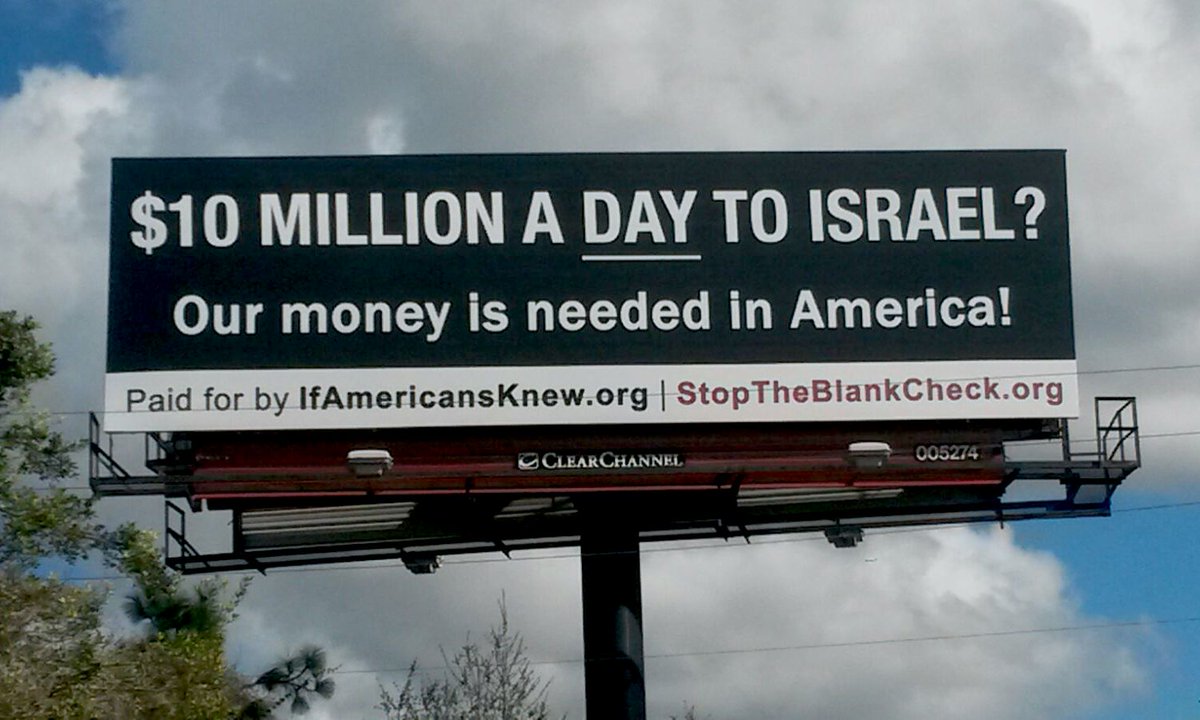 News coverage of our Orlando billboard. Donate to help put up more!: image via If Americans Knew @ifamericansknew, 28 January 2016 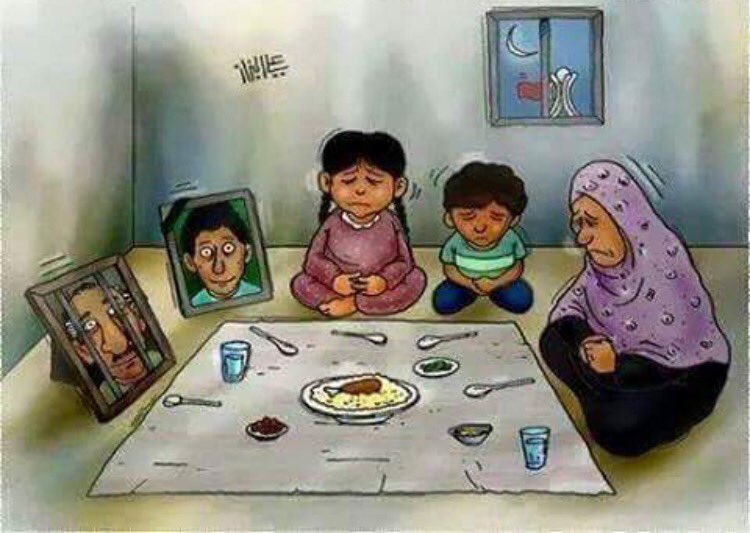 Question for the pro #Israel people. What do you expect the people of #Palestine to do? What options do they have?: image via Robert Martin @Robert_Martin72, 19 February 2016 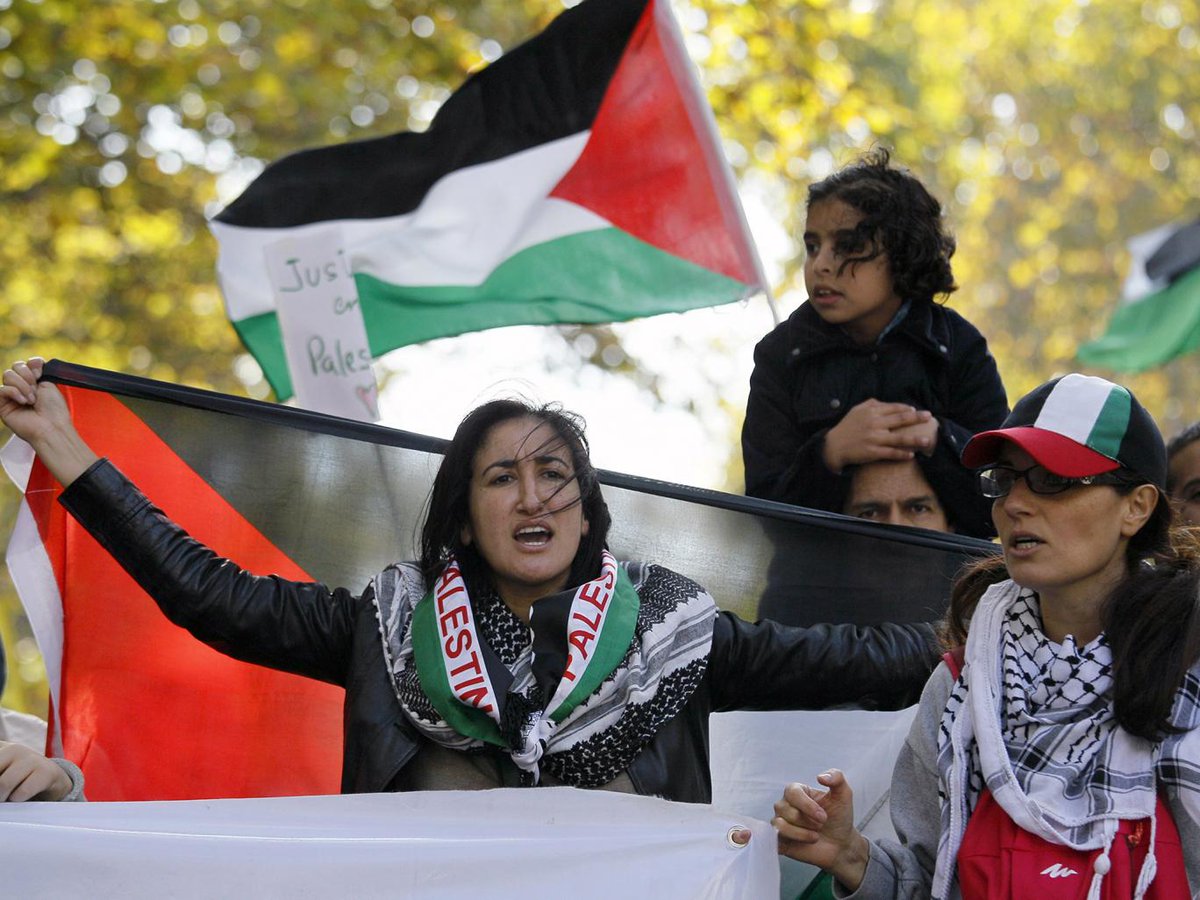 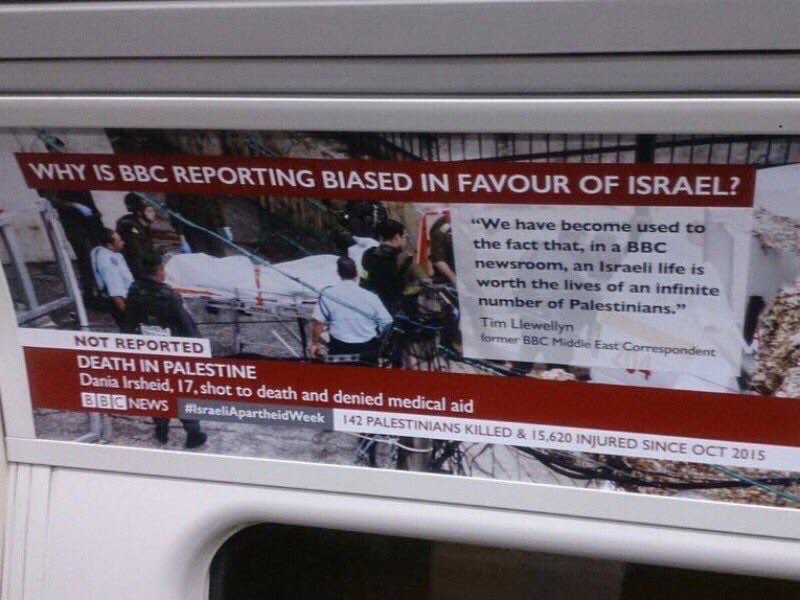 Wow !! These posters are on the London Underground !! That’s one way of raising issues. #Palestine: image via ravinder singh @RaviSinghKA, 22 February 2016

Roger Waters: ‘I have been accused of being a Nazi and an anti-Semite’: photo via The Independent, 19 February 2016 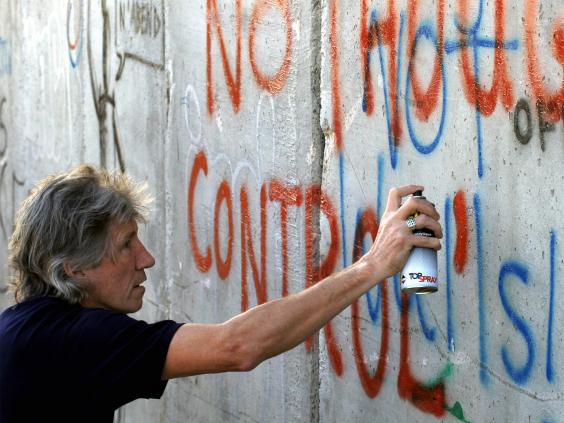 Roger Waters of Pink Floyd alludes to his band’s lyrics while painting on the Israeli-Palestinian security barrier in Bethlehem in 2006: photo via The Independent. 19 February 2016 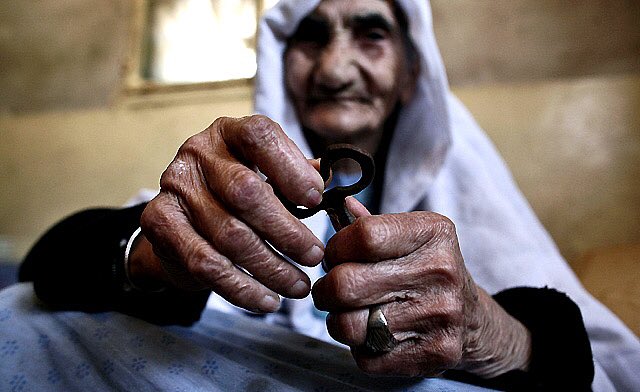 The key passed from father to son, up to the door from which it was wrenched… #RightOfReturn #Palestine: image via RosmeWarda_Palestine @RosmeWarda, 22 February 2016

Last night at a climate change event in New York City, Vermont Senator Bernie Sanders once again found himself in the crosshairs over his inconsistent — Israeli exempt — opposition to U.S. entanglement in the Middle East.  Sanders was interrupted by two protestors, while he addressed the panel on “The Climate Crisis: Which Way Out?”  The protesters held a sign for the audience, which read “BERNIE VOTED FOR THE WAR ON THE INDIGENOUS PEOPLE OF PALESTINE.”.: photo via Addicting Info, 21 September 2014 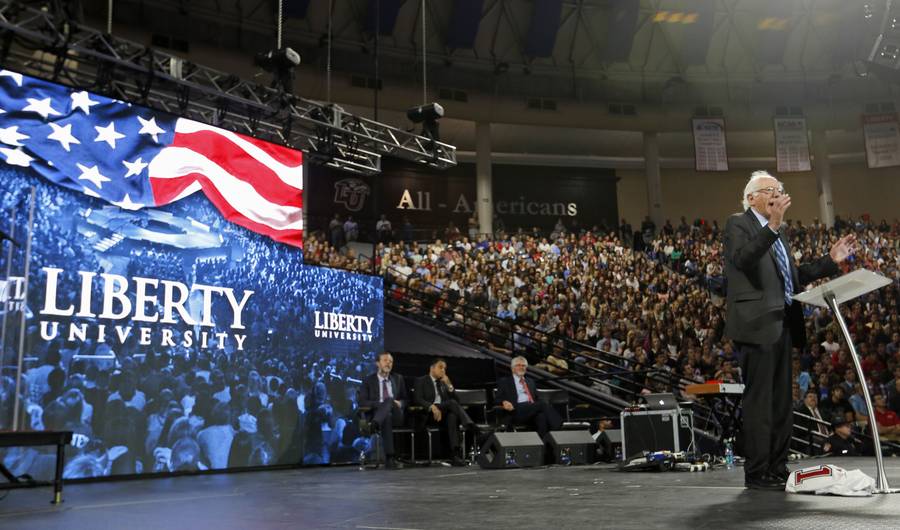 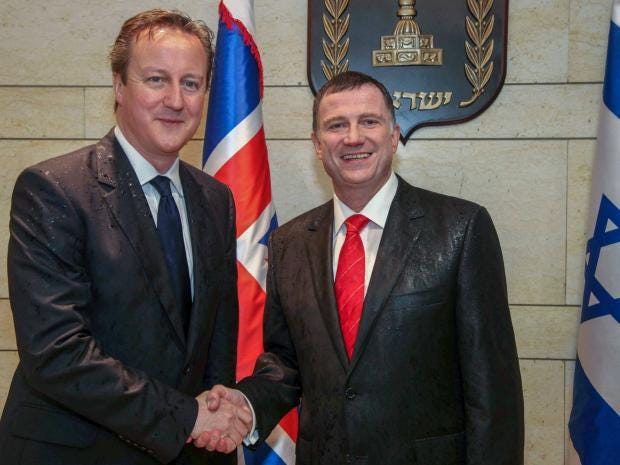 David Cameron is welcomed by the speaker of the Knesset Yuli-Yoel Edelstein during his visit to Israel in March 2015. The British Inter-Parliamentary Union has invited Edelstein — who lives on an illegal Israeli settlement built on Palestinian land, publically opposes Palestinian statehood and supports initiatives to colonize what is left of Palestinian land (e.g. Lobby for Greater Israel) — to address both Houses of Parliament on 2 March. In a recent interview, the British Ambassador to Israel David Quarrey said that “the relationship between Britain and Israel…is probably stronger and deeper than it has ever been”. The current British government has done everything to protect and enhance its ties with Israel, even trying to squash all dissent at home, and is undermining British democracy by restricting the Boycott, Divestment and Sanctions (BDS) campaign against Israeli products and institutions complicit with the occupation. In his speech to the Knesset during a state visit in 2014, David Cameron said he was proud that Britain played a major part in creating Israel. Is he also proud of Britain’s policies towards the Palestinians?: photo by Israel Sun/REX Shutterstock via The Independent, 22 February 2016 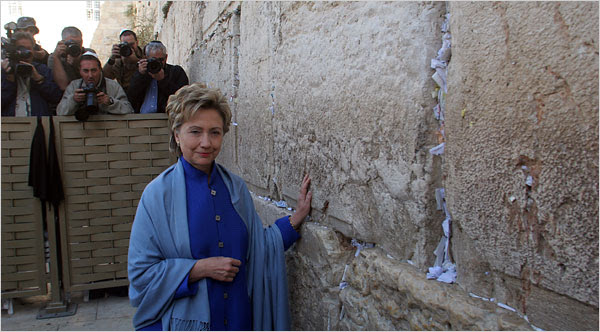 Hillary Rodham Clinton at the Western Wall in Jerusalem in 2005. After awkward episodes as first lady, she proved to be Israel’s friend as senator: photo by Rina Castelnuovo for The New York Times, 1 January 2009 Israeli President Shimon Peres (R) and US Secretary of State Hillary Clinton speak after a joint press conference on July 16, 2012 in Jerusalem, Israel. Clinton is in Israel to discuss diplomacy with Iran, Syria and Egypt in addition to peace talks regarding the Middle East: photo by Lior Mizrahi via Zimbio, 16 July 2012 Apartheid is back. Apartheid is a tangible, unmistakable realty in Palestine as it was in South Africa. Many were fooled to think that Apartheid was buried forever, that Colonialism was only meant for the history books. Now that we know we must take a stand and dare speak out.: photo by Mat Svensson via The Palestine Chronicle, 10 February 2016 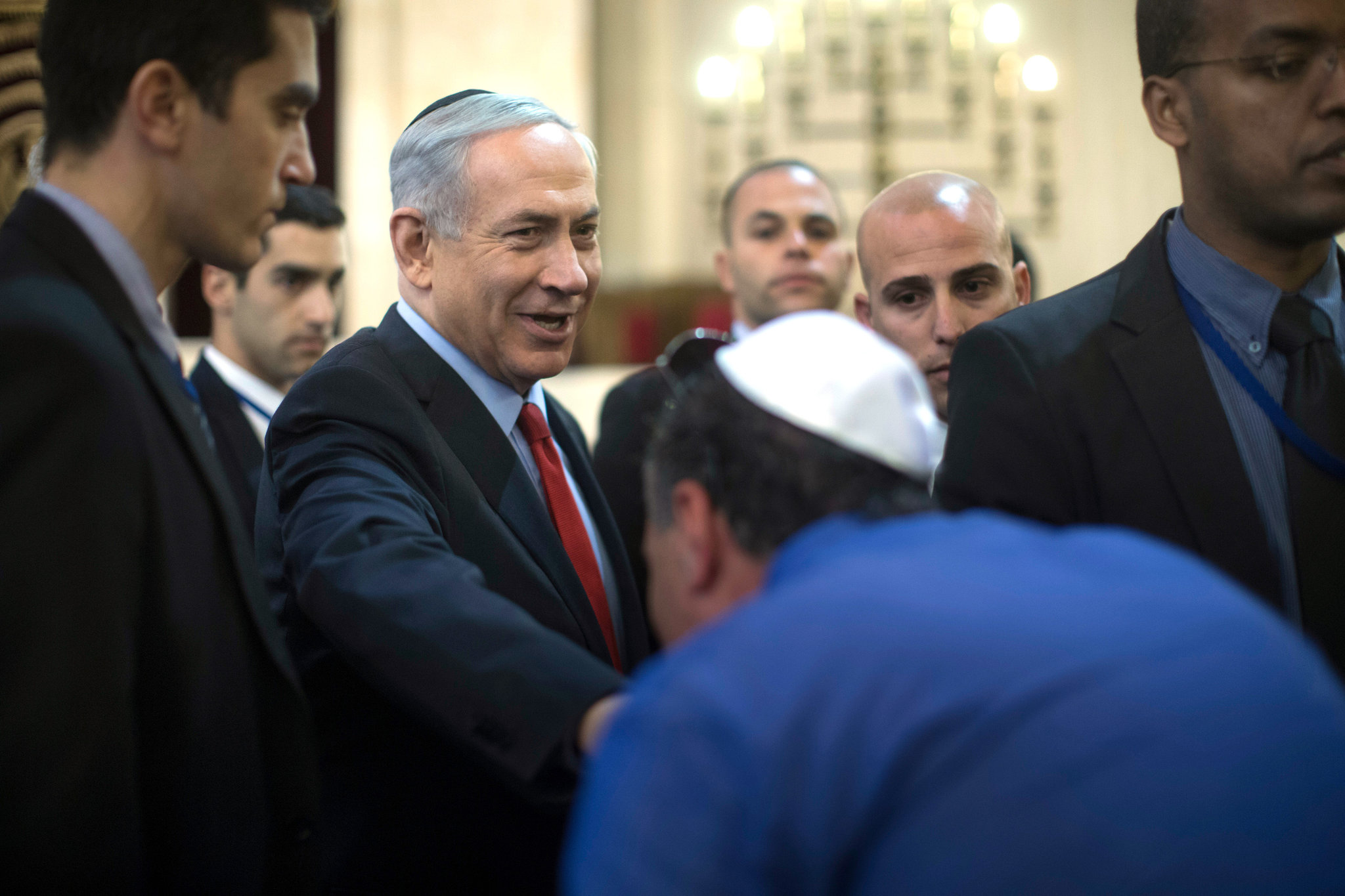 Prime Minister Benjamin Netanyahu of Israel arriving at the Great Synagogue in Jerusalem for the Purim holiday last week: photo by Uriel Sinai for The New York Times, 10 March 2015

TC said…
In August 2014, with the smoke still rising from the ruins of the Gaza Strip, where Israel’s brutal 50-day Operation Protective Edge offensive has just claimed the lives of over 2,100 Palestinians, mostly civilians, Sen. Bernie Sanders defends Israel’s “existential” position in language curiously echoing that of Binyamin Netanyahu — and silences angry citizens at Cabot Town hall, in his home state, by furiously ordering them to “Shut up!” (video via Secular Talk, 21 August 2014)
22 FEBRUARY 2016 AT 20:39
TC said…
Oh by the way, those of you who bravely lurked and looky-lou’d and then cautiously slunk away into the shadows secure in the cloaking safety of invisible passive distance, to lurk another day, probably won’t have been interested in knowing those London Underground posters addressing the BBC policy of not-so-subtly re/enforcing Israeli apartheid — one of which is seen here, posted by a Tube rider, Ravinder Singh — did not last long.